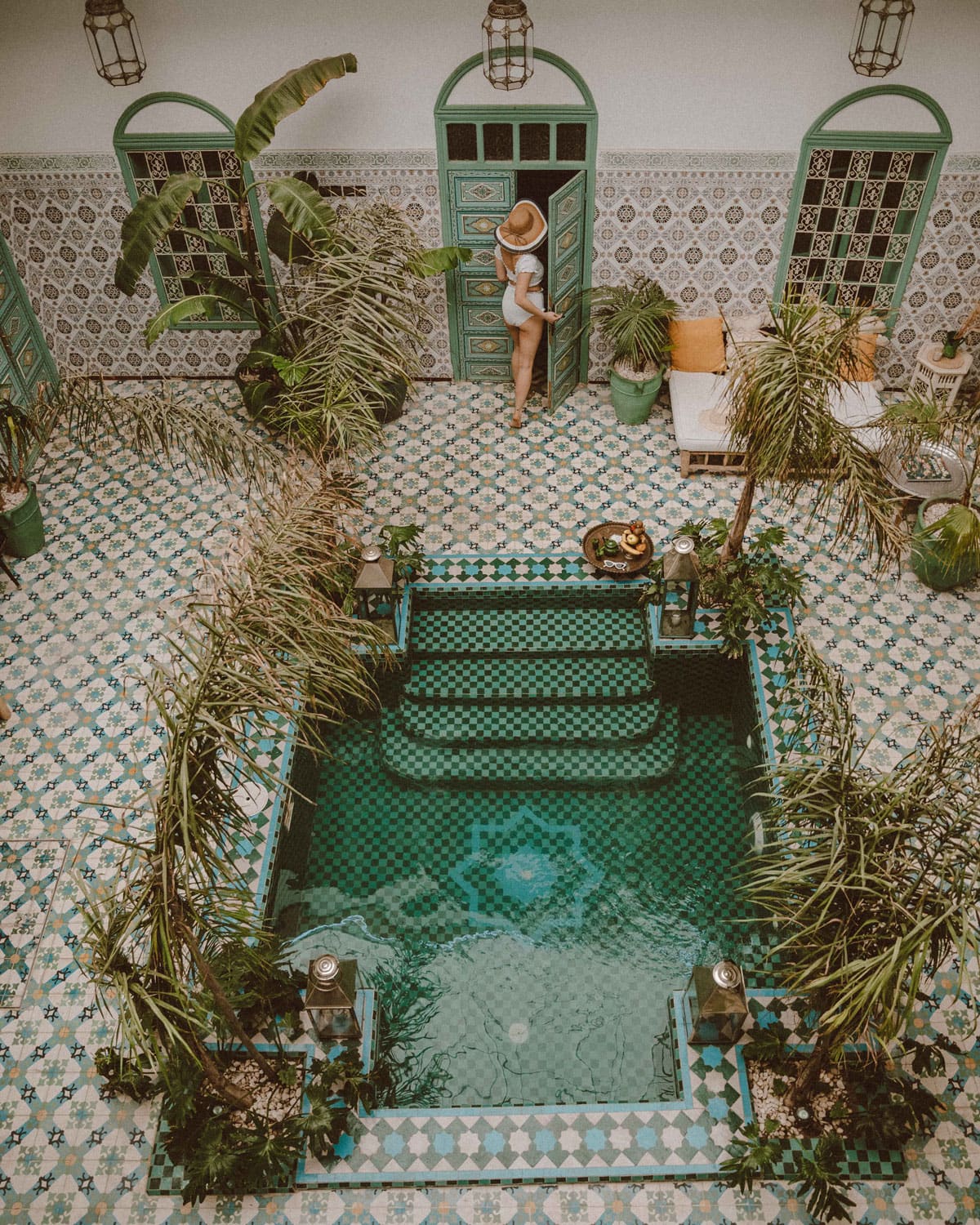 Salut you guys! Sooo where to start! I was super mega extra excited to go to Marrakech as it was on my list for ages but it left me a little disappointed. It was a cultural shock for me for sure 😀 . We visited in first week of March for five nights. The way I planned the trip was based on availability of the most instagrammable riads 😀 So basically I wanted to stay in either Riad Be or Riad Yasmine but let me tell you they are booked out for like 6 months in advance! When I was looking at it back in October, Yasmine was fully booked for so many months and Be had literally just two nights free in March so I booked it straight away 😀 and then I booked my flights based on those dates. We however stayed for 5 nights and so the other 3 we stayed in a basic Riad – Riad Chams, which was still nice, clean and had nice friendly staff but it wasn’t that instafriendly for sure – but 3 nights were cheaper than 2 nights in Riad Be. Depends what you’re looking for, I think it was worth paying more for Riad Be as not only I could take pretty pictures haha but it was just more luxurious, calm, smelled nice, felt nice..just perfect!

We got a taxi from the airport arranged by the Riad, so the guy was waiting for us at the airport, that was 20 eur for up to 8 people. We got to the Riad, it looked amazing and so we wanted to have glass of wine but I completely forgot you won’t get that in riads (not even in most of the restaurants – somewhere you can find at least a beer) so we decided to walk to the nearest big supermarket Carrefour which was 15 mins walk from us and this is the time when the SHOCK hit me 😀 The busy streets, full of people, raw meat hanging in that heat, cats everywhere, skinny thirsty sad donkeys, fainting horses standing on the sun, motorbikes EVERYWHERE – there is no such a thing like a pavement where you feel kinda safe, that also meant that you couldn’t really breath because of the smoke from the bikes,everything was so dirty, people throwing trash on the floor..just no rules and I am not used that! Also I wasn’t fan of the food there as well, so I lived mostly of fresh orange juice which was so sweet! Yum!

On the other side I loooooved all the riads, most of the people are very nice and friendly (if you don’t piss them off 😀 ), the shopping there is insane and the sunsets are beautiful! We also went on a day trip to see Ouzoud Falls and it was STUNNING! You can either hire a car and go by yourself, you can book a group trip or you can hire a private driver with tour guide and that’s what we did as we didn’t want to depend on anyone and we wanted to go and stop whenever and wherever we wanted. We booked that all in our Riad and it was 75 eur per person. We left the house at 7am and went straight there (the usual tour starts at 8am and they also stop at the local market on the way so we wanted to get there before all the tours did) I think it was about 3 hours drive. Now looking back at the entire trip I would not go to see the Eld Badii Palace and Bahia Palaca as I felt like they are just some Moroccan ruins but I would go on another day trip instead. I feel like 2 days are enough in Marrakech and then you should go and explore places around it.

When you book a hotel/riad most of them offer a transport from/to the airport so I recommend you to do that as the taxi drivers will probably overcharge you and you also need to pay cash. It should be around 20 euros to most of the places in Marrakech. Our riads where in the old town so we pretty much walked everywhere, but when we couldn’t be bothered to walk through the busy streets anymore we took the taxi which be careful does not have a meter reader. So before you take the cab tell the driver where you want to go and when he agrees ask him if he agrees to 50 dirham (around £4) that’s pretty much fee that will get you anywhere. If you are taking a taxi from some popular attractions it will be 70 dirhams. So remember to always agree on the price before you jump in!

We stayed two nights in Riad Be and 3 nights in Riad Chams. Riad be is insta heaven so when we got to the Riad Chams it was a step back haha but still it was a pretty place. Both of the places had sweet breakfast included (in Riad Be you can also ask for egg and avocado) and there was also cold and hot aircon if you needed it – it got really cold in the evening! So if you come in March definitely back a jacket for the nights out too.