I didn’t have to think for too long to come up with this list at all. Thanks to Instagram I was watching these trends daily and I even bought myself into some of them 😛

Quite simply, Gucci owned 2017. In the last twelve months the brand 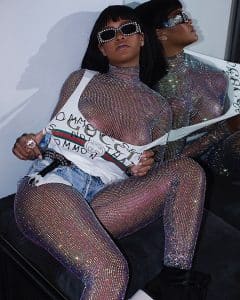 has influenced more than one trend on this list. The original white with logo and stripes tshirt is from the Fall 2016 collection and was first introduced in October 2016. It was the ‘it’ item on editors attending February’s runway shows. Following that success came a collaboration with Coco Capitán, featuring the artists signature scrawls across the print. Next up Rihanna riffs the entire runway look at Coachella, and thus a trend is born.

Now there are tie dye, embellished and motif emblazoned versions across the luxury market and it’s not only them who won with Gucci’s original. The mass market picked up on the references and has been serving aces with its sell out budget versions. Logomania has been picked up a lot so we will be seeing this trend in spring 2018 too 🙂

“It’s been a big year for gender. Many thousands took part in the women’s marches, amping up conversation around reproductive rights and gender equality.

Then came wave after wave of harassment revelations in the entertainment, hospitality and political worlds with the collective #metoo campaign that finally gave women a safe space to share their experiences. And now we close the year with the announcement that trans people will be able to sign up for the US military from January 2018.

Commercially it doesn’t take much to connect the dots between that, and the slogan t-shirts that have been selling out across the mass market. From the $409 ‘feminist’ Lingua Franca sweater to the $3.09 ‘feminist’ tote at Forever 21 – the message is loud and clear. ”

They were already massive last year and then they went and got even bigger. In 2017, nearly 126k new puffa jackets arrived which is a 23% increase on last year. The most successful brands with the highest number of full price sell out were Moncler, Pretty Little Thing and Zara.

Super-warm outerwear will continue to be popular in winter 2018, but with a growing consumer awareness of ethical concerns, there’ll be an increasing backlash against down and feather fills. Retailers like Uniqlo and Everlane who find tech-enhanced ways to avoid down will win in Fall 2018.

This trend got me too!

Let’s say the Gucci effect strikes again! We can find 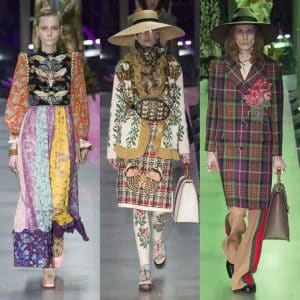 it over the shoulder of sweaters, across the front of leather bags and down the legs of jeans, on coats, belts shoes..everywhere!

What will happen in 2018? On Spring 2018 runways’ embroidery took an eighties turn, with more animal motifs, stars and emblems. Embroidery is a great way for the luxury market to differentiate itself in a very crowded market. The more complicated it gets, the less copied it can be on the high street.

Ruffles were big in 2016 and even bigger 2017. Ruffle tops, shirts, dresses and pants, from designers like Dolce & Gabbanna to high street retailers like Asos.

Will there still be ruffles in 2018? Yes but in softer, more sheer fabrics.

How I styled ruffles:

Last year was all about the luxury sneakers 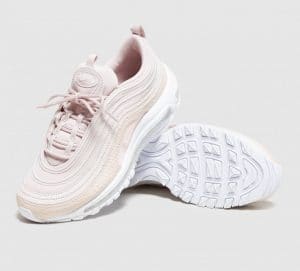 like Dolce & Gabbana or the sock Balenciaga sneakers, while 2017 was the year for sports brands. They’ve done that with re-releases, new tech and collaborations.  Some of the hits have been: Nike Air Force 1, Nike Air Jordan, Adidas x Alexander Wang, Nike x Off White, Vans x The North Face.

But the winner? It’s the twenty year re-release of the Air Max 97 that retailers can’t keep in stock long enough. In the last 12 months, not a single pair has been discounted, and they sell out in an average of 30 days. I’m surprised they’re not on my shoe rack then! 😛

What can you find in your wardrobe? 😛

How many trends did you buy into?